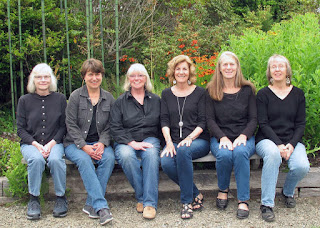 In the Mix is a women's a cappella vocal sextet based in Fort Bragg, California. They are known for popular songs sung in close harmony from every decade from the 1920's to the present.

The group was formed in January 2009 as an off-shoot of the Gloriana Carolers. Some of the carolers had so much fun singing together, they didn't want to stop. These carolers brought in a few friends, who brought in a few more friends, and In the Mix settled into a group of women who blend well vocally and personally.

In the Mix has three sopranos and three altos. Their songs are generally arranged in four parts: high soprano, low soprano, high alto, and low alto.

Nancy Severy, one of the carolers who founded In the Mix, has sung in a cappella groups for over 20 years here on the coast. She is the Office Manager at the Symphony of the Redwoods when she is not singing. Nancy sings high alto.

The group's two low altos (affectionately referred to as the basses) are Cathy Boxell and Darcie Mahoney. Cathy and Darcie have both arranged songs for In the Mix. Cathy has an extensive background in music from early childhood and plays clarinet and piano. She is a professional cook when she is not singing. Like Nancy, Darcie has sung in musical groups on the Coast for many years and works in forestry.

The sopranos are Robin Knutson, Kathy O'Shea, and Carolyn Steinbuck. Robin and Kathy usually sing high soprano.  Carolyn sings low soprano and sometimes high alto. Robin is a piano teacher and an accompanist, as well as the organist for St. Michael's Episcopal Church in Fort Bragg.  Kathy has arranged songs for In the Mix. Carolyn has also arranged songs for In the Mix and is a concert pianist and accomplished choral and orchestral conductor.

In the Mix has performed at the North Coast A Cappella Summit, at Symphony of the Redwoods' Pops concerts, at Mendocino Stories, in Gloriana Musical Theater's productions "Way off Broadway" and "Rock & Roll Revue 3.5", at The Woods, at the Point Arena library, at the Mendocino Music Festival, for the Mendocino Study Club, at the Gualala Arts Center, at the Opus Chamber Music Series, and for private parties.